Series: Burlap and Barbed Wire Series
Author: Shirley Penick
Genre: Small Town Contemporary Romance
SERIES BLURB
Colorado cowboys to tempt your heart.
The Kipling family own and operate a cattle ranch in the Colorado Rockies. Six siblings not looking for love, until it rides into their lives and hog ties them.
They only thought they were stubborn until they each met their true love.
Similar to if the Bridgerton family were cowboys… and, you know, not in Regency England. 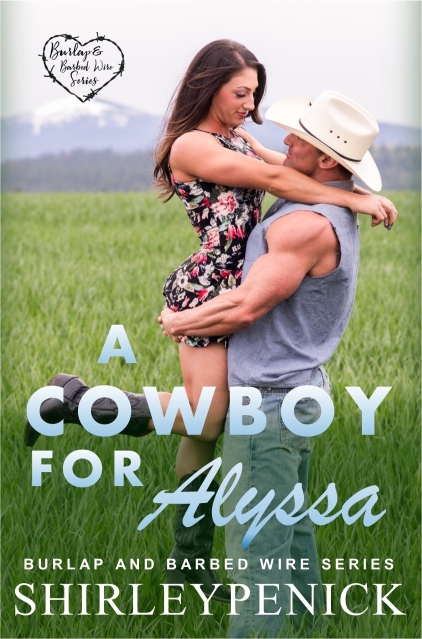 A COWBOY FOR ALYSSA
Looks can be deceiving, and a cowboy only gets one chance to make a good impression.
Alyssa Jefferson is ready to start her veterinary internship at the Rockin’ K ranch, in the beautiful Colorado Rockies, where she will be assisting with the births of over three hundred pregnant cows. It’s a dream come true, and she’s so excited the joy is oozing from her. As icing on the cake, it appears the brothers that own the ranch are sexy as can be. A few months with some eye candy, is just what the doctor ordered.
Beau Kipling sees the sweet young thing coming for her riding lesson, and feels a kick to his gut. What is this hot young woman doing dating a man old enough to be her father? He’s so ticked off, he can’t stop himself from being an ass to her. He’s never, in his whole life, felt the instant attraction he feels for this female, and she’s some old guys arm candy.
When the truth is revealed, that Alyssa is his intern for the spring, and not the sheriff’s new girlfriend, Beau knows he’s blown it. And he can’t even explain why he was so mean. No woman wants to hear a guy thought she was a gold digger. Now they must work together all spring. Can he convince her to give him a second chance?
ADD TO GOODREADS 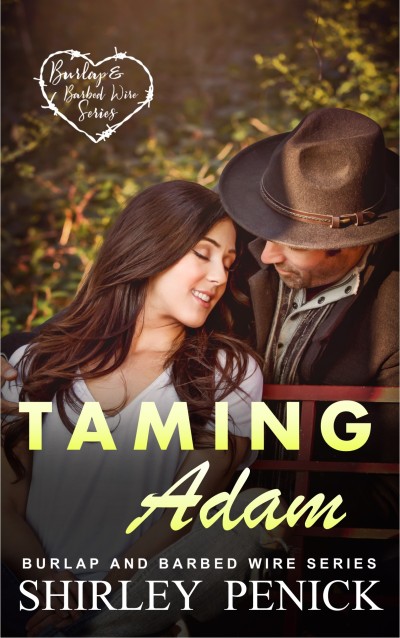 TAMING ADAM
The heart wants what the heart wants, even when the head says Noooo!
There are five brothers. Each one of them have killer good looks. One is engaged to her best friend. That leaves four to flirt with, four hot men, so why does she only have eyes for the oldest grumpiest one in the bunch. Rachel Reardon has to question her own sanity when she’s enthralled with a man she can hardly stand to speak to. A first-class jerk and sexy as sin.
Adam Kipling can’t believe his bad luck when his soon-to-be sister-in-law’s best friend arrives. She is smoking hot and too damn young for him. He has responsibilities as the oldest sibling and they do not include flirting with young women.
There isn’t enough land on this Colorado ranch to keep them far enough apart. An explosion of some sort is inevitable.
ADD TO GOODREADS 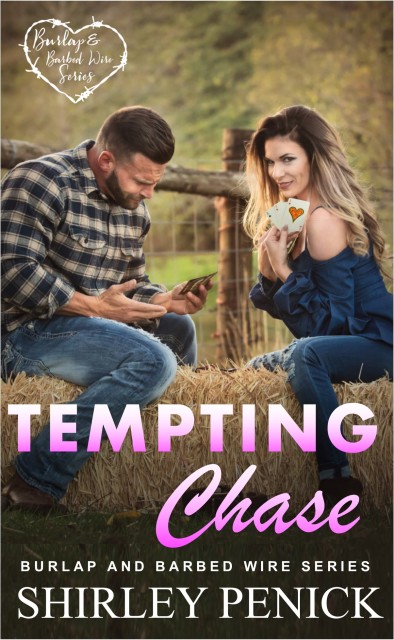 TEMPTING CHASE
Friends forever.
Chase Kipling and his twin brother Cade have been best friends with Katie since grade school. They hang out together all the time, riding horses, playing cards, going to movies and sporting events. A fun friendship for all three of them. Until a new guy in town mentions what a sexy woman she is. Chase sees red at the comment, how dare some guy lust after his best friend. Sure, she’s beautiful and sexy and has a great laugh… and now his eyes are opened and there’s no turning back.
Katie Jackson has known Chase since first grade, she’s had a crush on him since middle school, and loved him since, well, probably forever. But he’s got her firmly in the friend zone and she has no idea how to change that. Or if she even wants to risk changing it. After all friends is better than nothing. Isn’t it?
Can they go from best friends to lovers? Find out in this fun story.
ADD TO GOODREADS

ROPING CADE
A fake relationship is the plan.
Summer Attwood has been hiding in baggy clothes and ugly glasses for nearly ten years. When the town hottie asks her to be his faux girl-friend for a couple of weeks she decides it’s time to put away the disguise and shine.
Cade Kipling can’t believe the beautiful woman that emerges from the cocoon of overalls and over sized glasses. If he wasn’t dead set on taking a few months to get his head on straight, after his long time abusive girl-friend dumped him, he’d be after Summer in a heartbeat.
Two weeks of dating will either kill them or change their lives forever.
Click now to see which one it will be.
ADD TO GOODREADS

TRUSTING DREW
A death-bed promise turns lethal.
Lily Smith is kidnapped and held captive to prevent her from participating in a beauty pageant her best friend begged her to enter. But she is no passive little miss to let someone else determine her future. Unfortunately, during her flight to freedom, she hits her head on a rock and can’t remember her own name, let alone why she is running through the Colorado mountains barefoot with no coat.
Drew Kipling rides to the rescue of the pretty woman who needs to get warm and have her injuries taken care of. When she can’t remember her name, he vows to protect her, until she knows who she can trust.
What will they find at the pageant? More trouble or the love of a lifetime? Maybe both.
Join Lily and the Kipling family as they take New York City by storm and show them the cowboy way is the only way to catch a scoundrel.
ADD TO GOODREADS

EMMA’S RODEO COWBOY
He’s never even kissed the woman, but her son is clearly, without a doubt, his.
Zach McCoy has been on the rodeo circuit for six years and is making a damn fine living at it. When he comes home, for the first time, to be in his best friend’s wedding he’s got one helluva surprise waiting for him in the shape of a five-year old boy who is his spitting image.
Emma Kipling took matters into her own hands six years ago, before the man she was crazy about took off to join the rodeo. She didn’t care one bit that he was two years older and she was still in high school, she wanted one night with him before he left to compete in a dangerous sport. When he didn’t come back after she found herself pregnant she knew he had abandoned her and her son.
Now he’s back for her brother’s wedding, and by the look on his face, sparks are going to fly. She’s ready and willing to go toe to toe with him and give him a piece of her mind.
ADD TO GOODREADS

What does a geeky math nerd know about writing romance?
That’s a darn good question. As a former techy I’ve done everything from computer programming to international trainer. Prior to college I had lots of different jobs and activities that were so diverse, I was an anomaly.
None of that qualifies me for writing novels. But I have some darn good stories to tell and a lot of imagination.
I have lived in Colorado, Hawaii and currently Washington. Going from two states with 340 days of sun to a state with 340 days of clouds, I had to do something to perk me up. And that’s when I started this new adventure called author. Joining the Romance Writers of America and two local chapters, helped me learn the craft quickly and was a ton of fun.
My family consists of two grown children, their spouses, two adorable grand-daughters, and one grand dog. My favorite activity is playing with my grand-daughters!
When the girls can’t play with their amazing grandmother, my interests are reading and writing, yay! I started reading at a young age with the Nancy Drew mysteries and have continued to be an avid reader my whole life. My favorite reading material is romance in most of the genres, but occasionally other stories creep into my to-be-read pile, I don’t kick them out.
Some of the strange jobs I have held are a carnation grower’s worker, a trap club puller, a pizza hut waitress, a software engineer, an international trainer, and a business program manager. I took welding, drafting and upholstery in high school, a long time ago when girls didn’t take those classes, so I have an eclectic bunch of knowledge and experience.
And for something really unusual… I once had a raccoon as a pet.
Join with me as I tell my stories, weaving real tidbits from my life in with imaginary ones. You’ll have to guess which is which. It will be a hoot.
AUTHOR LINKS
TWITTER
INSTAGRAM
GOODREADS
BOOKBUB
AMAZON
BOOK+MAIN
FACEBOOK
WEBSITE